Merkel was almost falling as she trips over on stage

German Chancellor stumbled and fell on her way to the stage during a business event in Berlin.

German chancellor Angela Merkel tripped over as she made her way to a stage last night. After she recovered her balance Merkel joked on it.

"I WILL TAKE THE STAIRS NEXT TIME"

Merkel, who was forced to sit down during national anthems after a series of health scares over the summer, fell over as she took to the podium at a business event in Berlin on Wednesday evening. 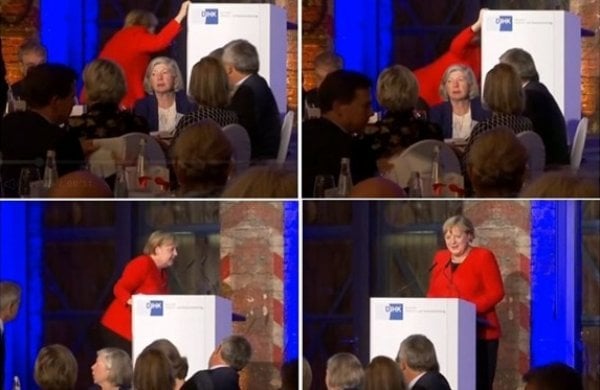 The 65-year-old said she had failed to notice the staircase leading up to the stage and lost her balance as she tried to climb up.

Merkel was almost falling as she trips over on stage WATCH

"I didn't see the stairs, I'll take them next time," she joked once she was upright again.