Turkish Disaster Presidency earlier announced that at least 20 were killed and many others were wounded.

The Turkish president early Saturday said all relevant departments have taken measures to ensure the safety of citizens following a 6.8-magnitude that struck the country's eastern provinces.

MINISTERS WERE SENT TO THE AREA

"Our relevant institutions have taken all essential measures," President  Erdoğan said, adding interior, health and environment ministers were sent to the quake-hit area.

Erdogan said the country's Red Crescent (Kizilay), the Disaster and Emergency Management Presidency (AFAD) and all other institutions were ready to assist citizens adversely affected by the natural disaster. 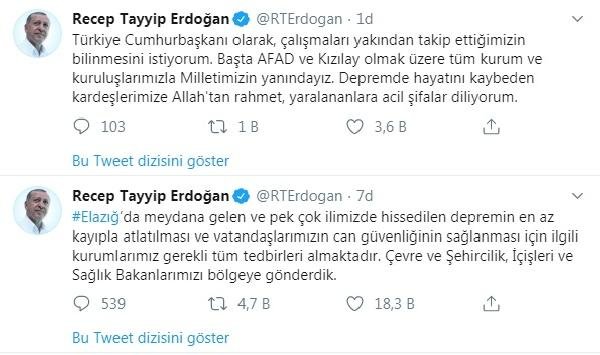 The quake was also felt in many other provinces including Adana, Osmaniye, Tunceli and Hatay. In addition, northern Syrian regions including Idlib, Azaz, Al-Bab, Jarabulus, Afrin and Tal Abyad also felt tremors.