"WE ARE AGAINST FOREIGN INTERVENTION"

Speaking on Turkey’s position on the Venezuelan crisis in a panel, Çavuşoğlu said: "We are against foreign intervention, resorting to undemocratic means, including coup attempts, imposing unilateral sanctions to replace legitimate governments."

The panel was held in Mexico City by COMEXI think tank where the top Turkish diplomat met with his Mexican counterpart Marcelo Ebrard and Senate President Marti Batres Guadarrama. 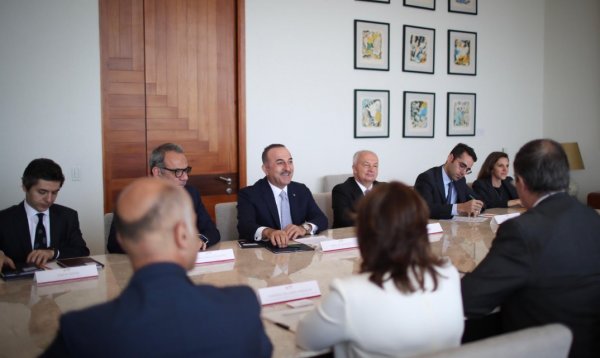 Highlighting the importance of sovereignty and non-intervention in internal affairs, he said: "We are concerned over attempts to undermine the constitutional order and sovereignty of Venezuela." "These attempts not only threaten stability, peace and security of Venezuela but also create a dangerous precedent and put the whole region in danger," he added. A disaster in Venezuela would have "extremely grave" consequences for the whole region, he noted.

Venezuela has been rocked by protests since January, when President Nicolas Maduro was sworn in for a second term following a vote boycotted by the opposition. Tensions escalated when Juan Guaido declared himself acting president days later, a move supported by the US and many European and Latin American countries. Russia, Turkey, China, Iran, Bolivia and Mexico have thrown their weight behind Maduro.