Turkey’s first presidential decree to be issued on Monday

President Erdoğan will be sworn in as president for the first time under the new executive presidential system on Monday.

The June 24 vote marked Turkey's transition to an executive presidential system of government, doing away with the prime minister's post, among other changes. President Erdoğan stated that the new cabinet and presidential oath-taking ceremony will be revealed on Monday.

Speaking at the ruling Justice and Development (AK) Party's parliamentary group on Saturday, President Erdoğan said that Turkey would enter a new period with the presidential swearing-in ceremony.

"WE WILL TAKE OUR COUNTRY MUCH FURTHER"

"As the first president of the new executive presidential system, I will announce the cabinet at 9 pm on Monday. We will hold our first cabinet meeting on Friday,” he stated. 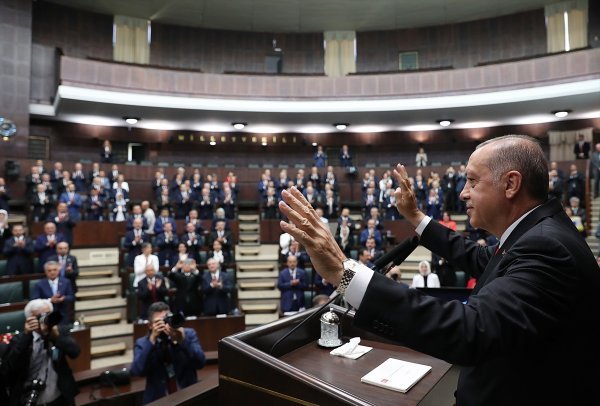 Erdoğan said that Turkey is determined to eradicate the terror threat. "We won't stop until we completely wipe off terror from our borders. The operations will continue until the PKK terror group is removed from Qandil and if needed from Sinjar," he said. "We will take our country much further by solving the structural problems of our economy, starting with the current account deficit, inflation and high interest rates," he added.