UK’s May hopes for a second Brexit vote

British Prime Minister Theresa May has carried out “scenario planning” for a second Brexit referendum in case she is forced by parliament to hold one.

According to the Daily Telegraph newspaper’s report, British Prime Minister Theresa May is hoping to find a way to get parliament to approve a Brexit plan without another public vote, but talks with the opposition Labour Party on a compromise exit strategy have yet to reach an agreement.

THE PLAN WILL BECOME RELEVANT IF TALKS WITH LABOUR FAIL

The Telegraph reported that May had discussions with officials and ministers about holding a referendum that would give voters the choice between leaving the European Union with a deal, leaving without a deal, or not leaving at all. 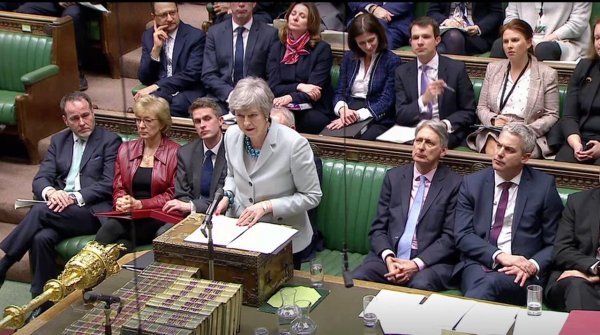 The report cited unnamed government sources, who said the referendum plan would only become relevant if talks with Labour failed and a majority in parliament supported holding another public vote. The Telegraph said a source in May’s office denied there had been a meeting to discuss a second EU referendum.

Britain’s 2016 vote to leave the EU, which was split 52 percent for Brexit and 48 percent against it, has continued to divide the country and paralyze the political system. May’s minority government missed a March 29 exit date and there is huge uncertainty over how, when, and even if Britain will leave.